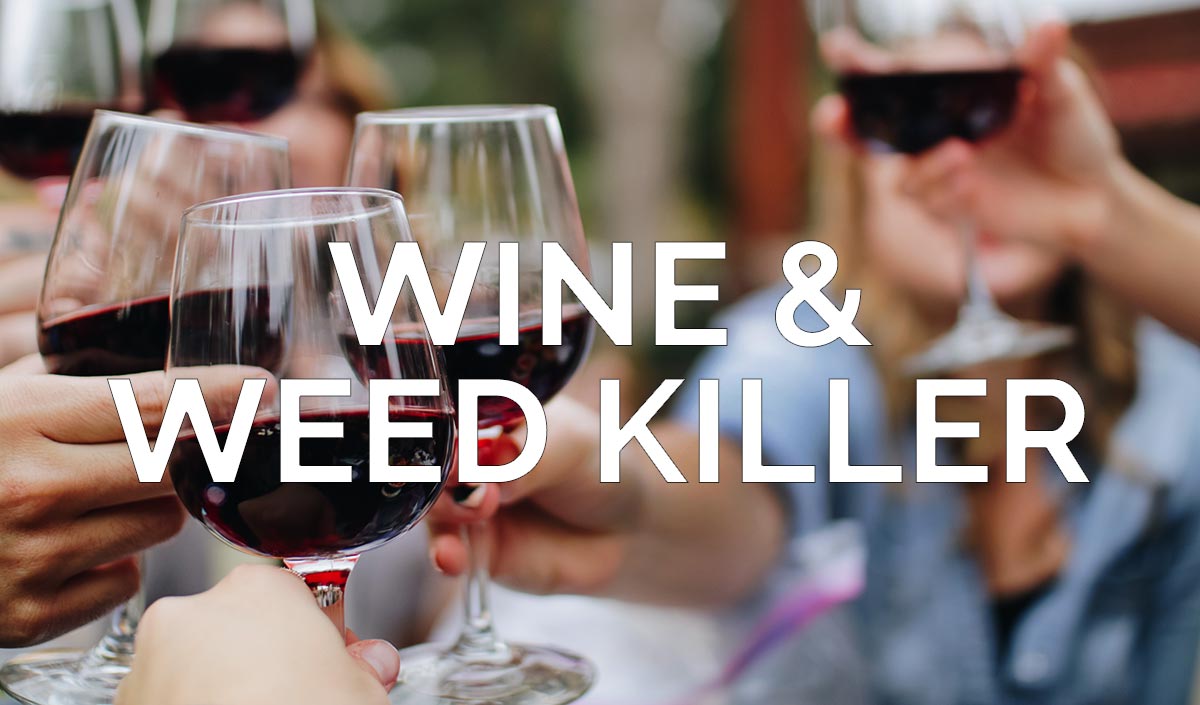 Want some weed killer with your wine?

What kind of question is THAT, you ask. Unfortunately, a serious one.

Looks like Monsanto is at it again. This time, though, it’s messing with wine and beer and not just the usual weeds. It appears as though glyphosate, the weed-killing ingredient found in RoundUp, has been found in a number of wine and beer products tested by the U.S. Public Interest Research Group. The U.S. PIRG stated in a recent release that samples of five wines and 10 beers were found to have varying amounts of glyphosate in all but one of them. Even though the levels were found to be “below” the EPA’s risk tolerances for beverages, the amounts found could still cause problems.

And although 20 wine and beer samples don’t really quantify or qualify as a full scientific study, it certainly provides the general public with “compelling evidence” that the industry sources ingredients that use glyphosate-based herbicides. The U.S. PIRG cautions consumers stating, “Based on our findings, glyphosate is found in most beers and wine sold in the U.S… Due to glyphosate’s many health risks and its ubiquitous nature in our food, water, and alcohol, the use of glyphosate in the U.S. should be banned unless and until it can be proven safe.”

Plus the fact of just knowing that a key ingredient in weed killer is present in our wine and beer, even the organic ones, should be alarming.

Glyphosate has been seriously analyzed as a potential carcinogen. Although Monsanto denies that the weed killer causes cancer, the World Health Organization disagrees, saying it is probably linked to it. And just last year, a California jury awarded a school’s groundkeeper a hefty sum who said his cancer was caused by glyphosate. California’s Office of Environmental Health Hazard Assessment has also labeled glyphosate as “known to cause cancer” and classified the chemical as carcinogenic under Proposition 65 in 2017. Of course, Monsanto denies it all and challenged the listing, but lost when the California Supreme Court refused to even hear its appeal.

In case you were wondering — Beringer, Barefoot, and Sutter Home were some of the wine brands tested. With the beers being Budweiser, Coors, Miller Lite, Sam Adams, Samuel Smith Organic and New Belgium. Sutter Home Merlot had the highest level of glyphosate of the wine samples, at 51.4 parts per billion, the report said. For beer, Tsingtao from China had the highest level, with 49.7 ppb. Coors Light had 31.1 ppb, and Peak Beer Organic IPA had no detectable traces of glyphosate.

The FDA has been testing glyphosate in food for two years now and will likely be releasing its findings soon. You can take that with a glass of wine or bottle of beer and do with it what you will. That being said, make sure you know what, where, and who sources your grain and grapes. They may not be as clean and organic as you think.

Want your vino without herbicide? Some of the wine/beer producing countries that have banned or heavily restricted glyphosates are: