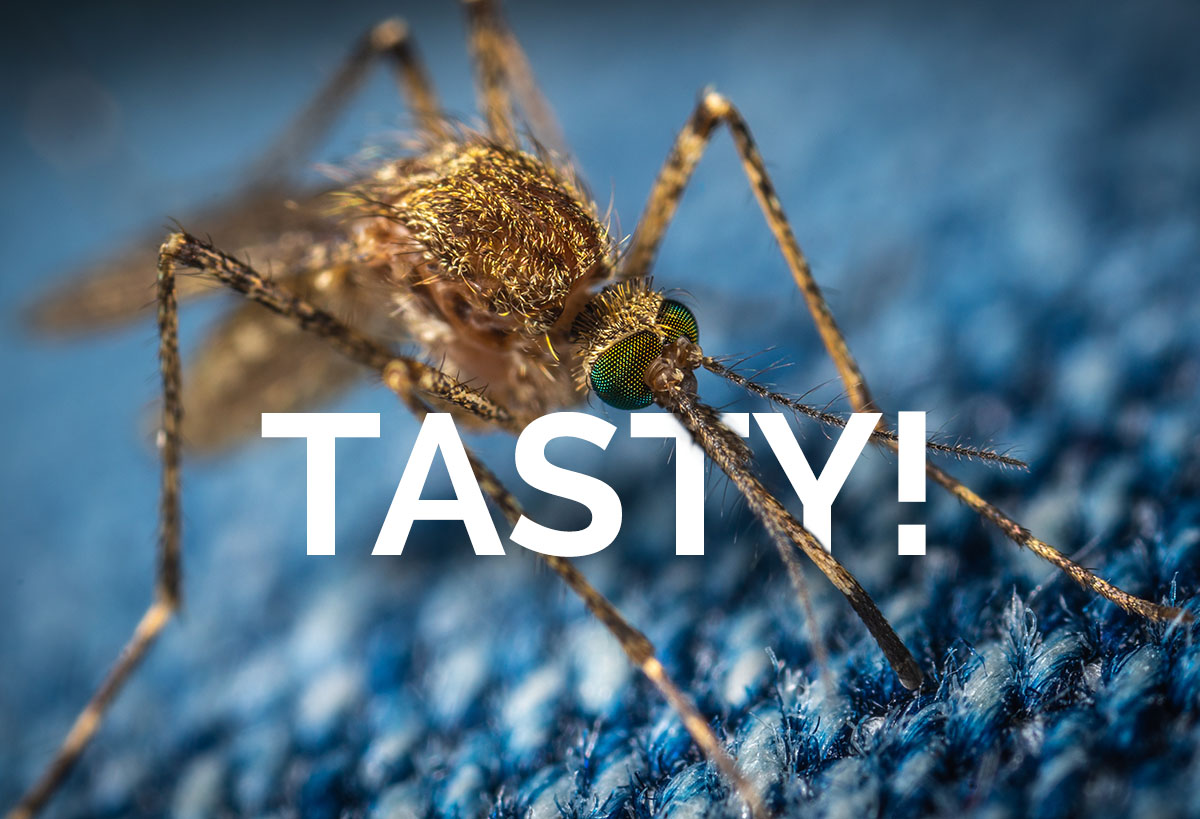 You’re outside, minding your own business, enjoying the summer evening, and then SMACK! One of your friends slaps a mosquito off of you. It may only be minutes, or seconds even, before you find yourself swatting away another one.

But your friend, the one who slapped you, is sitting a few feet away, enjoying the same summer evening, without being attacked by the little winged, biting buggers.

Why are some people seemingly more tasty and delicious to mosquitoes?

Is it because “you’re just so sweet” like your grandmother told you?

Is it your blood type?

Or is it all in your head?

The truth is that mosquitoes actually do prefer some people over others. As it turns out, an estimated 20 percent of people, are especially delicious for mosquitoes.

And your grandmother was right about you being sweeter.

According to Dr. Jonathan Ray, a medical entomologist and mosquito expert at the University of Florida, “Some people produce more of certain chemicals in their skin and a few of those chemicals, like lactic acid, attract mosquitoes. There’s also evidence that one blood type (O) attracts mosquitoes more than others (A or B).

There’s also the factor of your metabolic rate and how much carbon dioxide (CO2) you produce.

I bet your grandmother didn’t tell you about that.

In fact, they use it as their primary way of identifying potential targets.

You can change your metabolic rate up a bit through diet and exercise, but only so much.

Pregnant women and overweight or obese people generally have a higher resting metabolic rate, meaning that emit more CO2, so they are especially attractive to mosquitoes.

Beer will do it too. All it takes is one single 12-ounce serving to make you a tall, delicious drink to mosquitoes. However, researchers aren’t exactly sure why. They believe it has to do with the amount of ethanol excreted in sweat or the increase in body temp brought on about by alcohol, but neither of those factors has to do with mosquito landings.

Maybe they just like to have a good time?

As mentioned, mosquitoes also prefer Type O blood over types A and B with one study finding, in a controlled setting, that mosquitoes landed on people with Type O blood nearly twice as often as those with Type A. Type B blood fell somewhere in the middle.

To top it off, mosquitoes are into fashion. Apparently, they prefer dark clothing over light. It’s not because of the slimming effect darker clothes tend to have. It’s because of the fact that mosquitoes have a tough time flying in even the slightest of wind so they have to stay close to the ground. Since they are down there, they compare the silhouettes of their targets to the horizon. You stand out against the light sky if you’re in dark clothing. What’s more all of your motions single you out from your surroundings. Mosquitoes take your moving around and gesturing as a signal to come eat you.

So what do we do now that we know why mosquitoes like some people more than others?

Pretty much the common sense stuff you’ve known to do for years.

Don’t stay indoors all summer to avoid becoming a tasty treat for mosquitoes. With a little foresight and preparation, you can walk amongst them without being their main course. Just give a little grace to your friend who slaps you out of nowhere.

Unless they seem to be enjoying themselves. If so, you may want to see if there are actually any mosquitoes around!