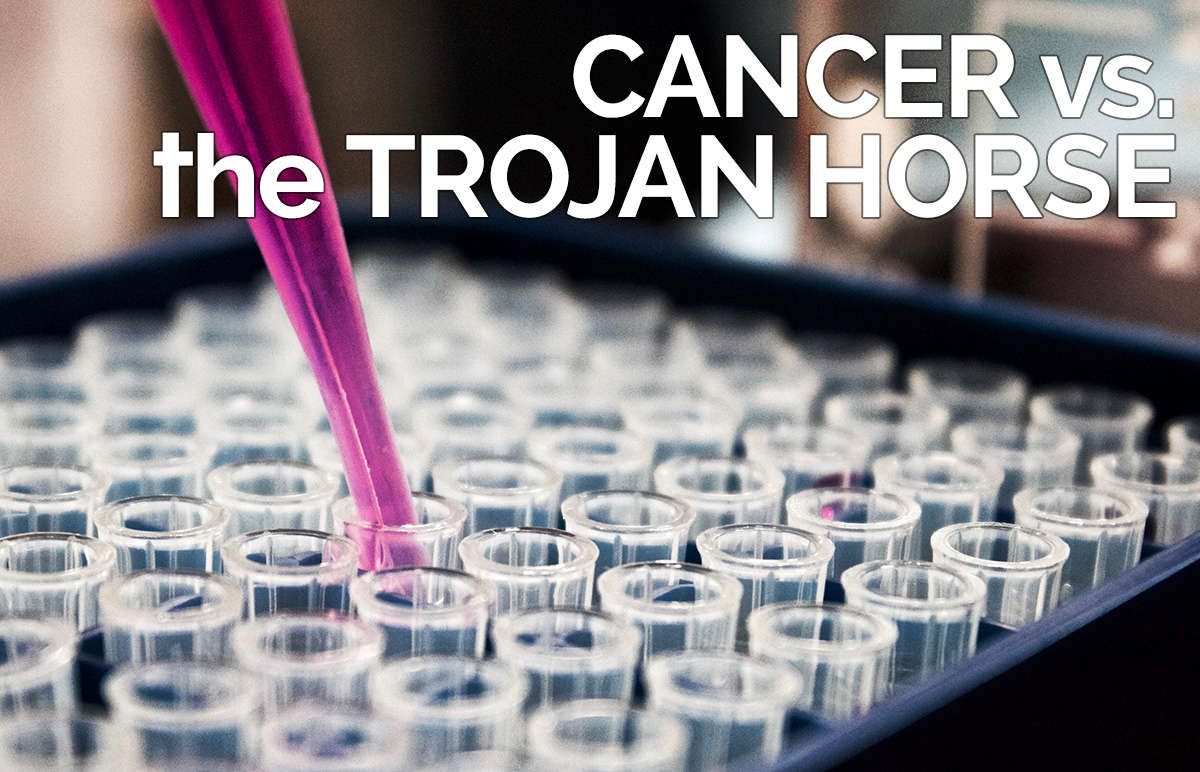 Talk about exciting and life-changing! Researchers have found a way to trick cancer!

Inspired by the tactics used by the ancient Greeks, researchers at Northwestern University have found a way to disguise chemotherapeutics as fat, which is what cancerous tumors love to feast upon. This new delivery system tricks the tumors into thinking they’re getting a Thanksgiving feast when, in reality, they are being attacked and killed from the inside out!

So how does it work?

Much like the Trojan horse scenario whereby the ancient Greeks snuck their way into the city of Troy inside a giant wooden horse disguised as a gift, researchers have custom designed a long-chain fatty acid that can bind itself to both ends of cancer-fighting drugs. With the drug safely disguised, it is then hidden inside a protein that is found in human blood that will carry it throughout the body presenting it as a delicious fatty snack to the cancer cells.

“It’s like a Trojan horse,” lead researcher Nathan Gianneschi explains in a release. “It looks like a nice little fatty acid, so the tumor’s receptors see it and invite it in. Then the drug starts getting metabolized and kills the tumor cells…It’s like the fatty acid has a hand on both ends: one can grab onto the drug and one can grab onto proteins,” Gianneschi says. “The idea is to disguise drugs as fats so that they get into cells and the body is happy to transport them around.”

What’s even better is the fact that with this kind of delivery method, the chemotherapeutics can be delivered at a much higher dose with much lower toxicity levels resulting in fewer harmful side effects than most of the chemotherapy treatments that are available at present. Researchers found that they were able to transport 20 times the dose of paclitaxel typically allowed by two older paclitaxel-based drugs. The astounding thing is that with this “trojan horse”, they found that the method was about 17 times safer than other paclitaxel-based drugs, even with the vastly higher dose.

Gianneschi states, “Commonly used small-molecule drugs get into tumors and other cells. They are toxic to tumors but also to humans. Hence, in general, these drugs have horrible side effects. Our goal is to increase the amount that gets into a tumor versus into other cells and tissues. That allows us to dose at much higher quantities without side effects, which kills the tumors faster.”

Here’s hoping that this Trojan horse finds its way into tumors around the world!

The study is published in the Journal of the American Chemical Society.